MC defines "compliance" as not only observance of laws, rules, regulations, international standards and internal regulations, but also respect for generally accepted standards for the conduct of business. In addition to 1) observance of laws and regulations, all officers and employees at the MC Group must also 2) observe internal rules and regulations and 3) respect generally accepted standards for the conduct of business. Officers and employees must consider at all times what these standards entail in the present-day context and in the applicable regions, as there are no clearly stated rules in this regard. Officers and employees are aware of the high expectations of society and aim to ensure that the MC Group remains trusted by society. 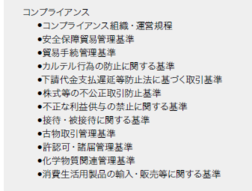 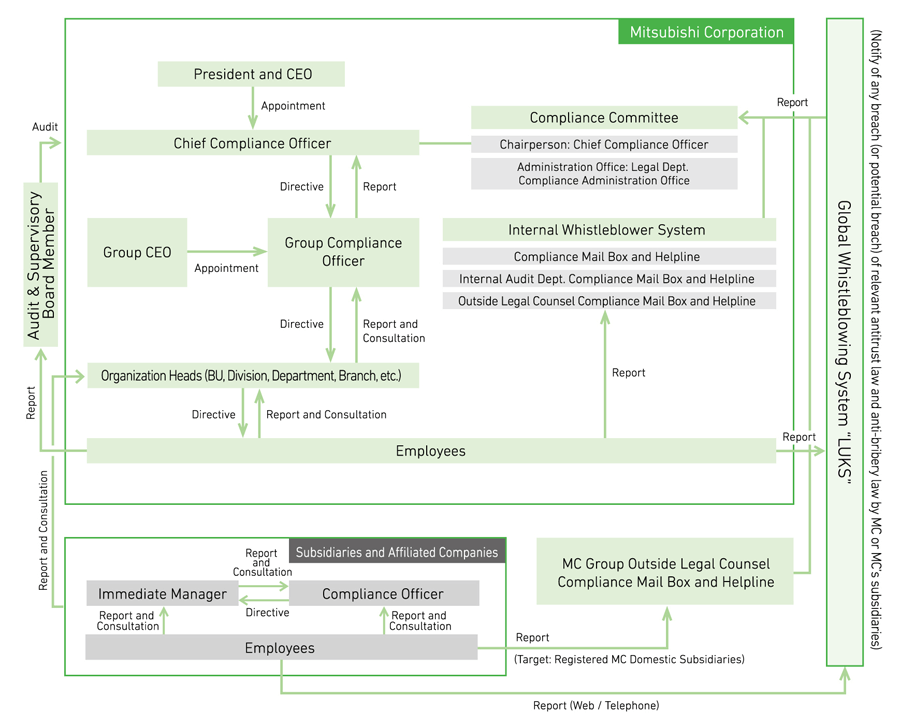 Major internal rules and regulations relating to compliance are listed below:

MC has established the “Code of Prohibition against Improper Payments or Other Types of Benefits” in order to prevent provision of improper benefits to domestic and foreign public officials, etc. (including persons who are deemed to be public officials under applicable laws, etc.), and prevent conducts from being seen as suspicious or untrustworthy by third parties. MC also complies with the anti-bribery laws and regulations of various countries, including Japanese criminal law and the Unfair Competition Prevention Act, the U.S. Foreign Corrupt Practices Act and the U.K. Bribery Act. Furthermore, MC has established a strict anti-corruption system and pre-approval process by setting detailed guidelines regarding the provision of entertainment or gifts to public officials, etc., and regarding the appointment of agents/intermediaries, etc. In addition, MC has established internal anti-corruption regulations requiring detailed due diligence when accepting workplace experience training for relatives of public officials, etc., as well as providing donations to government and public officials. We have also introduced guidelines to conduct anti-corruption due diligence on our business and other partners. MC continuously and periodically reviews and improves its internal rules and regulations taking into account the trends of the enforcement and proceedings brought by anti-corruption regulators,and anti-corruption programs/measures taken by other companies. In 2016, aiming to build a more effective anti-corruption system, MC conducted a thorough assessment by external experts regarding its entire anti-corruption systems. Utilizing the experts’ evaluations and recommendations, MC is committed to continuously improving its anti-corruption systems and ensure that they operate effectively. In the fiscal year ended March 2020, MC adopted a risk-based anti-corruption system that devotes appropriate attention and resources depending on the types and scales of transactions and the level of corruption risks in applicable countries, and revised relevant guidelines accordingly to build a system to prevent bribery/corruption on a consolidated basis.

Moreover, in 2016, MC created the Anti-Corruption Handbook to provide accurate information about anti-corruption, including information about laws and regulations, and enforcement cases relating to the bribery and corruption in major countries. The handbook also explains MC’s programs, systems and other initiatives to prevent bribery and corruption. The handbook has been distributed throughout the MC Group.

In the fiscal year ended March 2020, there were no bribery or corruption cases which had a significant impact on MC Group.

In addition to preventing corruption by officers and employees, MC established internal regulations to prevent corruption by any agents, consultants, intermediaries, etc. retained by MC (hereafter collectively referred to as “Agents”). The internal regulations require officers and employees to obtain prior approval from the relevant Compliance Officer to retain suitable Agents. From the fiscal year ended in March 2020, MC introduced new internal approval procedures for retaining Agents on the basis of the risk based approach depending on the nature of the relevant services to be provided by the Agents, the size and purpose of projects, and the level of risks, including the level of the corruption risk of the relevant countries.

In the fiscal year ended March 2020, there were no corruption cases detected in MC. As a result, no fines or financial penalties relating to the corruption were incurred.

Supervision by the Board of Directors

Every year, the Board of Directors receives reports regarding compliance matters, including anti-corruption initiatives, and the results and status of compliance violation cases, together with reports regarding the compliance programs and measures to be implemented in the current fiscal year. In addition, both Outside Directors and Outside Audit & Supervisory Board Members receive reports twice a year regarding compliance activities, so that they can provide more effective supervision from their external perspectives.

All reports regarding the facts, causes and preventive measures and remedies of each compliance incident are shared with the Administration Office for the Compliance Committee, and are used for conducting case analyses and risk assessment, and planning compliance programs and measures.

Starting in the fiscal year ended March 2020, MC has conducted the “Employee Awareness Survey”, which integrates the content of the Compliance Awareness Survey with its previous survey of employee awareness , with the aim of establishing and improving the foundations of MC’s organizational culture, including the level of compliance awareness. This survey is viewed as a key initiative for assessing and evaluating the current status of MC as well as for making improvements to the organizational climate in terms of human resources and organization, because it is able to confirm the degree of compliance awareness and the ethics environment in the workplace at the individual officer and employee level. In the fiscal year ended March 2020, approximately 6,000 MC employees, including those working at domestic and overseas offices, and 110 Group companies participated in the survey. MC implements measures to resolve issues identified by the previous survey, and conducts a follow-up survey to confirm the effectiveness of those measures.
In addition, as a result of the periodic review of these measures each fiscal year, from the fiscal year ended March 2021, MC began offering the Compliance Monitoring Survey to Group companies. This serves as a tool to supplement the Employee Awareness Survey, which is conducted once every three years in line with MC’s management cycle, by extracting compliance-related questions from that survey. In doing so, MC aims to identify compliance-related concerns in a timely manner even in fiscal years when the Employee Awareness Survey is not conducted.

Responses to Risk Factors by Each Business

Utilizing PDCA cycle, MC implements necessary and tailored compliance programs and measures, including conducting compliance seminars and adopting or amending internal regulations to address the compliance risks identified as the results of the various surveys, reports and monitoring, taking into consideration of the opinions and ideas of the Compliance Officer of each Business Group. The results are further monitored, and the analysis of the results is reflected in the further identification and evaluation of risks. The aim is to improve the awareness and knowledge about compliance of all officers and employees by repeatedly and rigorously educating and training them. 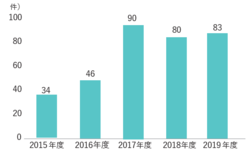 MC has established internal whistleblowing systems, known as the “Meyasubako(Compliance Mail Box and Helpline).” Reports to the systems are directly sent to the Administration Office for the Compliance Committee. The systems are reporting or consultation hotlines for any compliance-related questions or problems, including workplace misconducts and harassments, violations of laws and regulations, as well as bribery and corruption. MC has also established whistleblowing reporting routes to the Internal Audit Dept. and the Audit & Supervisory Board Members. In addition, MC has established a whistleblowing reporting route connecting to outside legal counsel (called the "Bengoshi Meyasubako(Outside Legal Counsel Compliance Mail Box and Helpline") for officers and employees who wish to remain anonymous. While the outside legal counsel will confirm whether the informant is an office or employee of MC , they will not reveal the name or the sections to which the informant belongs to the Administration Office for the Compliance Committee without the informant’s consent. There is another whistleblowing reporting route called the “MC Group Legal Counsel Compliance Mail Box and Helpline” for officers and employees of MC Group companies. Furthermore, in 2016, MC established a new whistleblowing system for anti-trust and corruption issues (called “Let Us Know System(LUKS)”), which is available to the officers and employees of MC and its domestic and overseas subsidiaries. Our internal regulations clearly stipulate that we protect anonymity and confidentiality of the informant and the content of the report, protect informant’s human rights and prohibit retaliation and disadvantageous treatment of the informant. Moreover, when investigating the reported matters, we ensure that any conflicts of interest are eliminated. After receiving details of a whistleblowing report, the Administration Office for the Compliance Committee will share the information only with limited number of personnel who need to know the report to conduct the investigations and actions. Every year, we invite outside instructors to provide training to those in charge of investigating and responding to whistle blowing report on how to handle and investigate the report and points to keep in mind. Thus, while we have set up multiple whistleblowing reporting routes, we continue to review and improve them going forward. In the fiscal year ended March 2021, we engaged external expertsto assess the effectiveness of our whistleblowing systems and its operation. With regard to management-level harassment training, MC conducts internal trainings aimed at general managers, team leaders and other levels. MC is working to prevent harassment by introducing case studies. (1) The prohibition of harassment is stipulated in the Code of Conduct; (2) basic policies; and pamphlets and other resources have been produced to prevent harassment; and (3) the Whistleblowing Systems set for above as well as the Human Rights Consultation Desk in the Human Resources Department have been established, which are all well-publicized internally.

In the fiscal year ended March 2020, there were no whistleblowing reports which had a significant impact on the management of the MC Group. 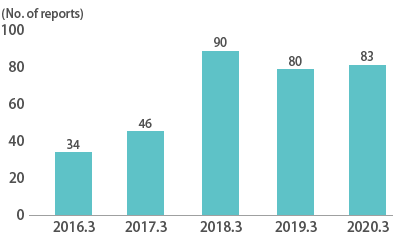 MC conducts in-house training programs on a Company-wide basis according to level in the organization. Compliance-related training is offered on individual topics such as antitrust laws, the Subcontract Act, prevention of bribery and corruption including anti-bribery laws, and labor management. In FY2019, MC held a total of more than 200 in-house legal and compliance seminars worldwide, with a cumulative total of approximately 8,000 participants. Furthermore, tailored seminars are held for each Business Group and region. Moreover, MC has created an e-learning program related to the MC Code of Conduct based on the latest case studies. Every year, all MC officers and employees, advisors, part-time employees, secondees and temporary staff are required to complete this program.

In 2013, MC began holding compliance discussions in which small groups of employees in each workplace discuss compliance issues that could occur in the workplace as well as other day-to-day concerns. These discussions serve as a means of supplementing conventional training, which tends to be a one-way form of communication, and of improving the compliance awareness of every officer and employee. By facilitating these types of discussions about familiar topics in each workplace, every employees will recognize that compliance is something that is connected to them personally, which will in turn gradually increase their compliance awareness. MC has been conducting compliance discussions at least once a year, with the participation of essentially all employees at all levels of every internal organization, including overseas offices since 2013, and MC has also expanded this initiative to over 100 domestic and overseas subsidiaries.

Distribution of Handbook for Officers and Employees

If MC presently owes debt (legal or constructive) as a result of past incidents, is likely to be required to pay such debt, and a reliable estimate of the amount of such debt (penalties, settlement amount etc.) can be made, MC must record provisions for such debt. As of the end of March 2020, there were no significant provisions requiring separate disclosure in its financial statements.