Basic Approach on Human Rights (Including Response to International Norms)

MC believes that respect for human rights is fundamental to doing business globally. MC stipulates its respect for human rights in its Corporate Standards of Conduct and Social Charter. Furthermore, MC’s Code of Conduct for Executives and Employees states that MC will “respect human rights; will not engage in discrimination on the basis of race, ethnicity, creed, religion, or any other grounds; will not tolerate harassment; will foster a proper understanding and awareness of the issue of human rights; will respect the cultures, customs, and language of other countries and regions,” both inside and outside MC. MC also supports international norms such as the International Bill of Human Rights (Universal Declaration of Human Rights and International Covenants on Human Rights), the UN Guiding Principles on Business and Human Rights, the core labor standards of the International Labour Organization (ILO), and the Voluntary Principles on Security and Human Rights. Furthermore, in the UK, the government established the UK Modern Slavery Act (MSA) which requires certain companies to disclose actions taken to mitigate modern slavery in their supply chains. In response to this legislation, MC publishes a statement annually. Furthermore, the Mitsubishi Corporation Policy for Sustainable Supply Chain Management includes clauses covering the prohibition of forced labor and child labor. MC expects its suppliers to understand, embrace and abide by this policy.

The Universal Declaration of Human Rights was adopted at the third United Nations General Assembly on December 10, 1948. It is proclaimed as “a common standard of achievement for all peoples and all nations” to respect and ensure human rights and liberty. MC supports this declaration.

MC supports the International Bill of Human Rights, and makes specific reference to the Billin its Code of Conduct.

MC endorses all eight conventions, and highlights its commitment to the conventions in the Mitsubishi Corporation Code of Conduct.

Support for the Voluntary Principles on Security and Human Rights

In 2000, the US and UK governments, along with tnatural resource and energy companies and NGOs involved in human rights and corporate social responsibility, held a series of dialogues on security and human rights. During these sessions they established the Voluntary Principles on Security and Human Rights, a voluntary set of principles on respecting human rights and ensuring the safety of operations. These were drawn up in accordance with the UN’s “Basic Principles on the Use of Force and Firearms by Law Enforcement Officials and Code of Conduct for Law Enforcement Officials.” These principles include: “Security is a fundamental need, shared by individuals, communities, businesses, and governments alike, and security and respect for human rights can and should be consistent”; “Corporate security personnel should protect corporate assets from theft and violence, while bearing in mind the potential risk of human rights abuses through the misuse of weapons”; “Companies should act in a manner consistent with the laws of the countries within which they are present, to be mindful of the highest applicable international standards, and to promote the observance of applicable international law enforcement principles, particularly with regard to the use of force”; and “Companies are members of the community and should be actively involved in the local community and contribute to its welfare.” Other principles that companies should keep in mind when undertaking their activities and the role of governments are also mentioned.

MC supports the voluntary principles outlined in the Voluntary Principles on Security and Human Rights.

MC understands that children are especially vulnerable to human rights abuses and that special consideration of their rights is necessary. MC also believes that respecting the rights of children allows them to better understand their own rights, which in turn contributes to their ability to become active members of society and leaders of future generations. With this understanding, MC supports the United Nations and ILO treaties＊ regarding children’s rights and has established internal policies for its employees to ensure that child labor is not tolerated and that children’s rights are respected. In particular, MC supports the Convention on the Rights of the Child, including children’s survival and development rights, protection rights, and participation rights. As stated in MC’s Policy for Sustainable Supply Chain Management, MC will not employ any person who is under the minimum working age and will not engage in any employment that impairs children’s development. MC also supports the Children’s Rights and Business Principles, strives to prevent abuses of children’s rights in our business, and invests in social contributions through philanthropic efforts focused on children’s rights.
Through its “Policy for Sustainable Supply Chain Management,” MC also expects its suppliers to conform to these standards by refraining from employing anyone under the minimum working age, and prohibiting children to work in any way that impairs their development.

＊ The UN Global Compact, the Convention on the Rights of the Child, the Children’s Rights and Business Principles, the Convention concerning the Prohibition and Immediate Action for the Elimination of the Worst Forms of Child Labour (ILO Convention No. 182), etc.

In the context of its overall commitment to respecting human rights, MC pays special attention to upholding the rights of indigenous peoples, acknowledging their unique social and legal status under national and international laws, as well as their unique histories and cultural contributions throughout the world. When examining new business investment proposals, MC takes into consideration how the business operations may impact the rights of indigenous peoples and will consult with the relevant stakeholders. MC supports the United Nations Declaration on the Rights of Indigenous Peoples and the Indigenous and Tribal Peoples Convention (ILO Convention No. 169).

Mitsubishi Corporation (MC) understands the importance of protecting its employees from dangers such as violence and preventing theft of assets throughout its business operations, and retains armed security services when deemed necessary. MC believes that the abuse of weapons by security forces involves a potential risk of human rights abuse. With regard to retaining armed security services, in addition to complying with the laws of the countries and regions in which it operates and adhering to international standards, MC also supports relevant international agreements＊.

Reference:Diagram of the Sustainability Promotion Framework

When reviewing investment and loan proposals MC conducts a comprehensive screening process which considers not only economic factors, but ESG impacts as well. From the viewpoint of human rights, MC’s assessments and considerations are informed by the following areas: (1) the rights of indigenous peoples, (2) existence of infringements to children’s rights, and (3) human rights-related due diligence at investee companies and in the supply chain. MC’s risk management approach is informed by the UN Guiding Principles on Business and Human Rights, the IFC guidelines and the Japan Bank for International Cooperation (JBIC) Guidelines for Confirmation of Environmental and Social Considerations. Besides screening new investment and exit proposals, MC also strives to make improvements to existing business investments by monitoring their management practices.

MC has established various consultation systems, including an internal human rights consultation desk and the whistleblowing system, so that any human rights concerns can be raised. These systems ensure that human rights related grievances can be raised any time by mail, telephone or in person. These systems can be used anonymously and in confidence, and matters are handled and investigated by the persons who have no conflict of interest in the matter. Solutions are offered with the utmost consideration of the informant’s wishes. Employees are informed about the systems during human rights awareness training at the start of employment, and information related to the systems is posted at all times on MC internal bulletin boards. MC also covers human rights issues in its annual compliance e-learning program to which all executives and employees (including full-time and part-time employees, secondees and temporary staff) are required to take . In addition, as a group-wide compliance program, MC provides human rights training to employees who are transferred or seconded to its affiliated companies.

In the fiscal year ended March 2020, there were no cases of human rights violations or discrimination that had a significant impact on the MC Group’s operations.

MC has established the Sustainability Advisory Committee which consists of 6 external experts. MC regularly seeks the diverse perspectives of this committee about MC’s human rights efforts and other sustainability matters. In addition to regular committee meetings, committee members also visit business sites on an annual basis in order to deepen their understanding of MC’s sustainability efforts. 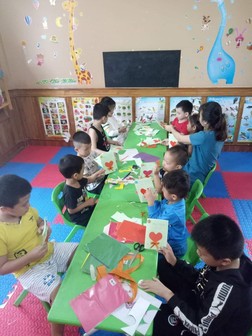 As a company handling a diverse range of products and services across the globe, we recognize that ensuring our supply chains operate sustainably is crucial to our business. MC has established the Mitsubishi Corporation Policy for Sustainable Supply Chain Management, a policy which outlines MC’s actions to address human rights, labor rights, and environmental issues in the supply chain. This policy serves to convey MC’s fundamental perspective to its suppliers around the world, and expects all suppliers to understand, embrace and abide by it.

We provide training (such as programs geared toward specific levels of management including those for new employees, as well as training on trading practice) on our corporate philosophy, including respect for human rights and relevant guidelines. Our results for the year ended March 2021 are as follows.

＊ Average rate of participation for each training course

In Ha Tinh Province, Vietnam, children with impairments are often denied educational opportunities if their families are economically disadvantaged. Through the Anh Dao Special Education Center, MC supports educational courses for children with autism and training courses for their parents, with the aim of improving the educational environment and raising their standard of living.

Friendship Camp for Mothers and Children

MC has been holding the Friendship Camp for Mothers and Children since 1974. The Camp is catered to single mothers and their children, and gives them a chance to interact with nature. Through these activities, MC aims to help the next generation to play an active role in society. The Camp is currently held in Minamiuonuma-city, Niigata Prefecture, a city rich in nature. The employee volunteers who accompany the campers train and hold meetings for about three months prior to the Camp so that the participating parents and children can maximize their time and enjoy a fun and safe experience in nature. To date, 17,868 mothers and children and 1,163 employee volunteers have participated. The Camp is one of MC’s flagship philanthropic activities and aligns with MC’s focus on long-running initiatives and employee participation.

MC regularly participates in the United Nations Forum on Business and Human Rights and strives to grasp the latest trends in the business and human rights field. In addition, MC participates in the World Business Council for Sustainable Development (WBCSD)’s People Program in order to exchange information with other companies and learn best practice. MC actively participates in other initiatives and events related to human rights such as seminars held by Shift, an organization which specializes in research with respect to the UN Guiding Principles on Business and Human Rights.